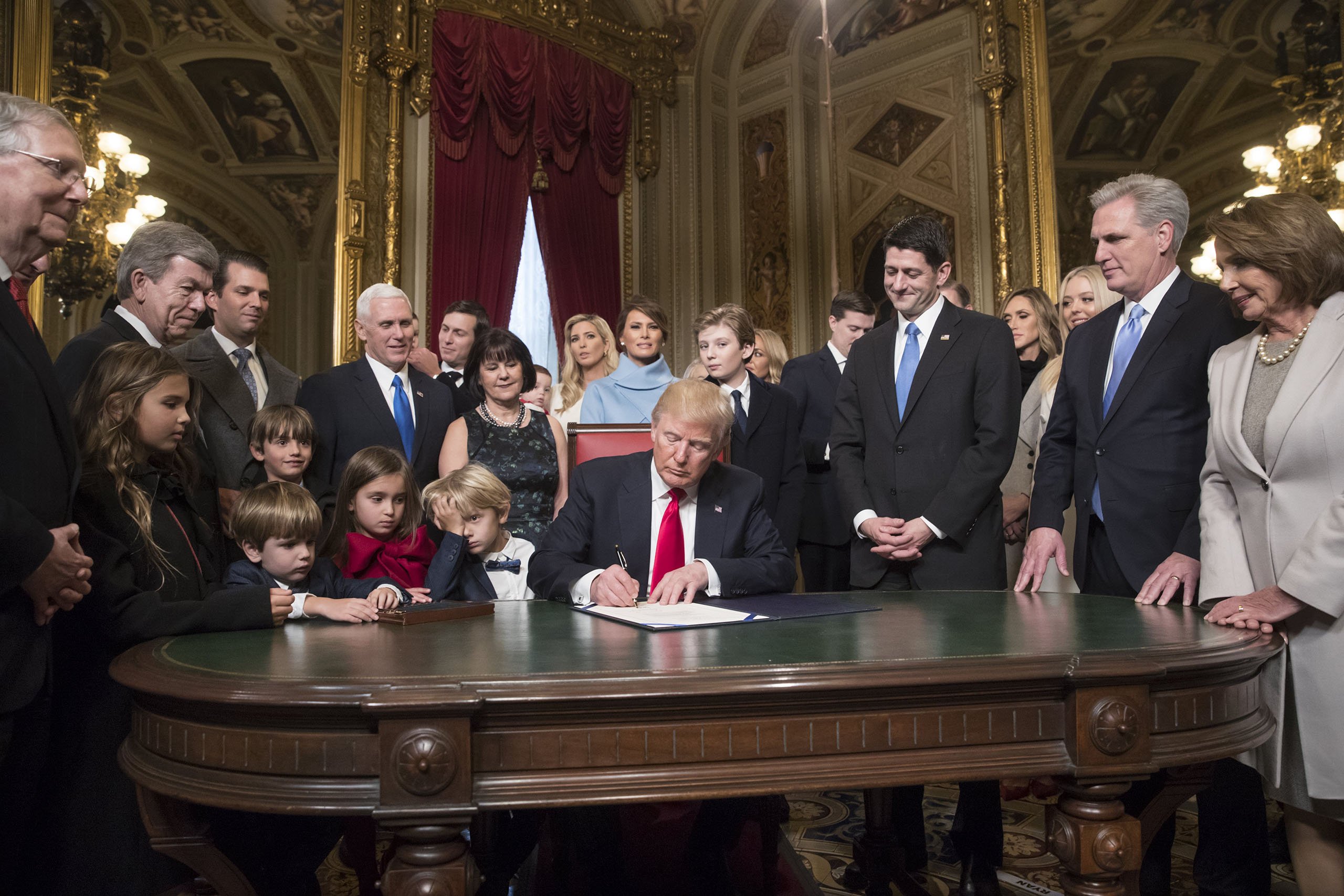 Exactly eleven days ago, Donald John Trump entered the White House as the 45th President of the United States of America. One can’t say that during these days the rabble-rousing Commander-In-Chief has been twiddling his thumbs. One could also contend that it would have been much better had he done so.

On January 20th Donald Trump was sworn in as the next President of the United States after Barack Obama. His speech was fundamentally unlike anything we have come to expect from an inaugural address: portraying the image of a ruined America, summarised by the piercing expression “American Carnage”, the President uttered, for the first time in any inaugural address, words that go along very well with such dreary assessment of the current state of things on the other side of the pond: “bleed”, “disrepair”, “ripped”, “rusted”, the famous “sad”, “stealing”,“stolen” and “tombstones”.

Also, he didn’t miss out on underscoring the nationalistic/protectionist approach to policymaking: “from this day forward, it’s going to be only America first” and “protection will lead to great prosperity and strength”, defying centuries of history and the entirety of international economics textbooks, which beg to differ with such conclusion. Last but not least, the most alert moviegoers among us detected a noticeable resemblance between a fragment of Bane’s speech in the 2012 movie “The Dark Night Rises”, where the villain states “We take Gotham from the corrupt! The rich! The oppressors of generations who have kept you down with myths of opportunity, and we give it back to you … the people” and “we are transferring power from Washington DC and giving it back to you, the people”.

Immediately after, Twitter and Facebook were deluged with photos of the Washington Mall during Obama’s Inauguration Day in 2009 and Trump’s in 2017 side-by-side, revealing of how small the attendance was for the latter, something further confirmed by photos taken during the parade, depicting semi-empty bleachers as hundreds booed the passing motorcade. Before heading to the Inaugural Ball, President Trump signed his first executive order, whose exact content is still blurred but that was presented as the beginning of the procedure of the full dismantling of the Affordable Care Act.

January 21st will go down in history as the day of the worst first-day-on-the-job by any White House Press Secretary in the history of the country.

Sean Spicer, already a meme icon on the Web, came out swinging stating that “this was the largest audience ever to witness an inauguration, period” and that “these attempts to lessen the enthusiasm of the inauguration are shameful and wrong”, gainsaying the basic facts that, one would have hoped, could never be a matter of debate in a civilized society. Also, he scolded journalists for “deliberately false reporting” and menaced “we’re going to hold the press accountable”.

On the same day, President Trump visited the CIA headquarters at Langley, VA, where he gave a speech that was extensively excoriated by many, first among whom outgoing CIA director John Brennan who maintained that President Trump’s speech flaunted “despicable display of self-aggrandisement” that left him “deeply saddened and angered”, as the President spent his time talking about the number of times he had been featured on TIME Magazine cover, the matter of the crowd size and called journalists “the most dishonest human beings on Earth”. So much for the “I will be President for all Americans”.

Finally, it was also the day of the Women’s March in Washington, NY, Los Angeles and all sorts of cities around the country and the World, a protest the President scorned the day after with the ever-present tweet “watched protests yesterday but was under the impression that we just had an election. Why didn’t these people vote?”

As if Saturday hadn’t been bad enough, Kellyanne Conway told at NBC’s Meet the Press that Mr. Spicer, on the previous day, was just offering “alternative facts”, sending George Orwell’s “1984” sales through the roof.

On Monday, President Trump commenced implementing his legislative agenda, scrapping the TPP, setting up a federal hiring freeze on non military-workers and outlawing funding for NGOs that provide abortion or provide information about abortion around the world.

The next day, President Trump signed an executive order that permits the construction of the notorious Keystone XL and Dakota Access Oil Pipelines. President Trump, while signing such order, avowed that the Keystone XL pipeline would bring “a lot of jobs, 28,000 jobs. Great construction jobs”, flouting the fact that these jobs would be only temporary, and that long-term jobs, according to a study by the State Department, will be no more than fifty. The Dakota Access Pipeline affair, a project worth almost four billion dollars, gained prominence during summer and autumn as the Standing Rock Sioux tribe, joined by thousands of protestors pouring into North Dakota from all over the country and the world, fiercely defended the waters of Lake Oahe, scoring a big victory as the US army corps of engineers denied the final permit to build under the lake.

It is probably no coincidence that President Trump owns shares of Energy Transfer Partners (a Trump spokeswoman declared in early December that the then President-elect had sold his shares of Energy Transfer Partners but, given the fact that the President has rebuffed to disclose his tax returns, it’s difficult to ascertain the legitimacy of such statement) and Phillips 66, two of the companies overseeing such construction. On Tuesday it was reported that the President had debarred the Environmental Protection Agency from using their social media accounts and awarding new contracts or grants. Going out with a bang, in the evening the Tweeter-In-Chief tweeted that “if Chicago doesn’t fix the horrible “carnage” going on, 228 shootings in 2017 with 42 killings (up 24% from 2016), I will send in the Feds!”, a less than subtle reference to a possible imposition of the martial law in the city.

On January 25th, new criticisms appeared all over newspapers as President Trump signed two divisive executive orders, the first for the construction of the ill-famed wall on the Mexican border in order to keep “criminals” and “rapists” out of the country and the second to slash funding to sanctuary cities, those cities where local law enforcement officials do not cooperate much with federal law enforcement officials that are to implement deportation.

During the usually exaggerated signing procedure, President Trump offered his “alternative facts” on the matter, declaring that “we’re in the middle of a crisis on our southern border”, yakking about an “unprecedented surge” in illegal immigrants coming from Mexico and other states in Central and South America, bluntly snubbing the fact that immigration is at its lowest point from the mid 1970s, after reaching its high point around 2001. Also, in an interview with ABC news, President Trump defended the use of torture which, according to his judgment, “absolutely” works and that the United States need to “fight fire with fire” when it comes to terrorism.

On January 27th, no executive order were signed but the feud with Mexico continued as Mexico’s President cancelled the trip to Washington arranged for the upcoming week after

President Trump promised the “immediate construction” of the wall and guaranteed that Mexico would end up with the bill.

Ostensibly, the President’s idea is to slap a 20% tax on all exports from Mexico to the United States. Such measure would imply the exact opposite of what the President had campaigned on, not to mention the public display of a seeming unfamiliarity with the workings of a tax: American consumers would pay for the wall, as prices on Mexican imports would increase by 20%. This is no surprise, as nobody with an even vague understanding of geopolitics would have ever thought that things would have panned out in President Trump’s favour. Even more so after both previous (Vicente Fox) and current (Enrique Pena-Nieto) Mexican President have made crystal clear that “Mexico is not going to pay for that fucking wall”, with #Fuckingwall promptly becoming one of the top trending hashtags on President Trump’s favourite social media. It is also worth mentioning that this could be only the beginning of a serious trade war, as Mr. Fox has stated that “Trump has brought back a very strong Mexican spirit and we’re ready for the trade war”.

If the first week of a Presidency can be a guideline for what’s to come, we can be quite certain of the following: President Trump is dead-serious about realising what he talked about during his “hostile-takeover” of the Republican Party. In other words, we are in for a ride.