(Not) Welcome Back, Voodoo Economics 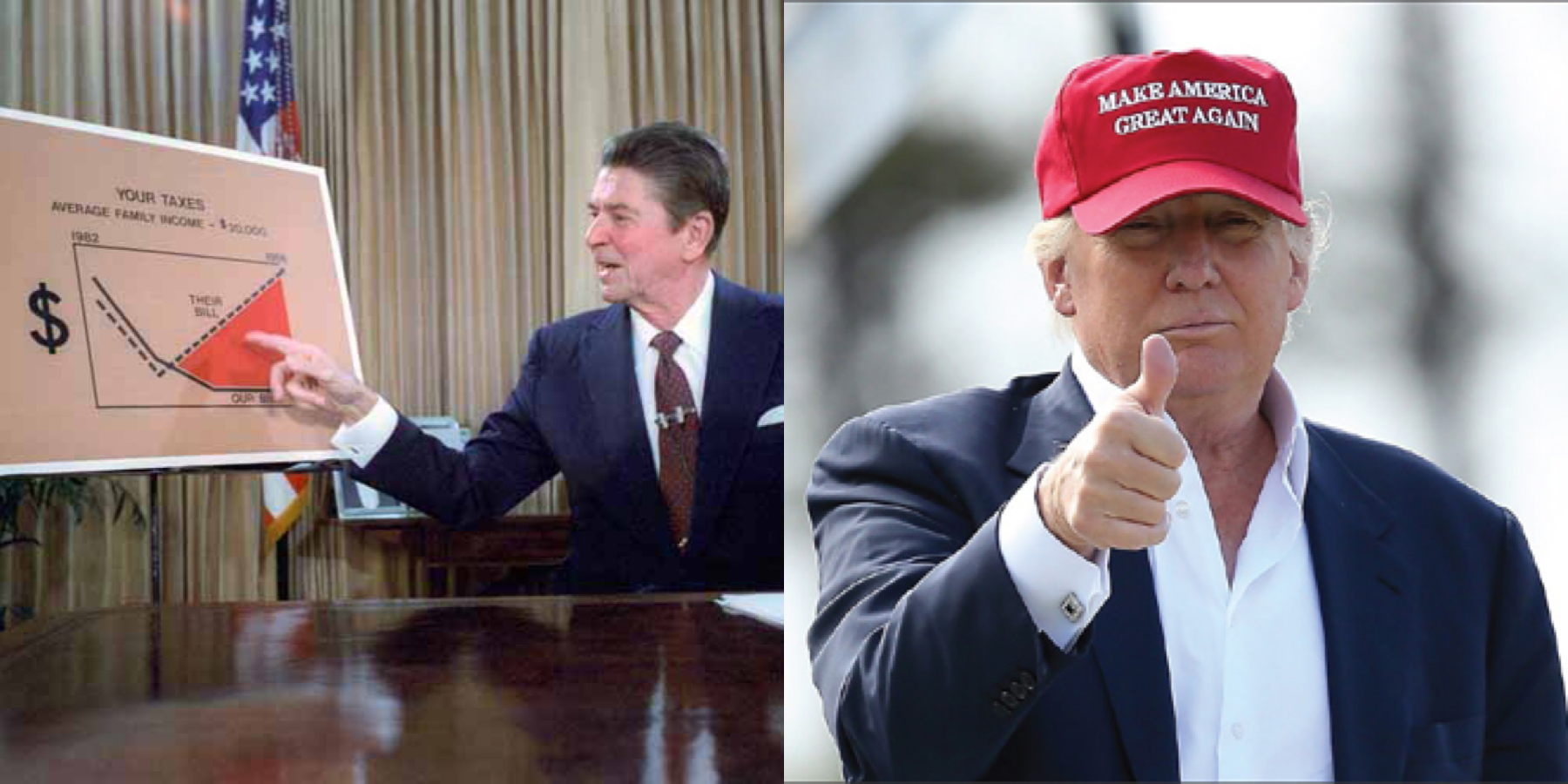 On September 27th, the Big Six (Paul Ryan, Steve Mnuchin, Gary Cohn, Kevin Brady, Mitch McConnell and Orrin Hatch) unveiled their proposal for a tax reform. It’s bad. It’s bad economics, first and foremost. It’s bad politics too. Not that one would expect something reasonable to come out of such “Dream Team” but, on the scale of “bad”, there is “bad”, “pretty bad” and then “this bad”. This tax reform proposal is “this bad”.

The plan includes, among other things, the reduction of the seven individual income tax rates to three (12, 25, and 35 percent), double the standard deduction together with eliminating personal exemptions (a combo that could actually worsen things for families depending on the number of children), repeal the individual and corporate alternative minimum taxes, repeal the estate tax, reduce the corporate tax rate from 35 to 20 percent, tax pass-through business (partnerships, sole proprietorships and family farms) income at a top rate of 25 percent and exempt the foreign earnings of US corporations from US tax.

The venerable Tax Policy Center at Brookings has published a detailed paper discussing the implications if such proposal was adopted and made a reality. Budget-wise, it would cost 2.4 trillion over the next decade and 3.2 trillion over the successive one. In other words, 5.6 trillion would need to be added to the national debt. The bulk of these numbers come from the business provisions, with the reduction of tax rate on corporate earnings and pass-through business incomes costing 6.7 trillion over 20 years. The repeal of the estate tax would further reduce tax revenues by approximately 680 billion. Finally, the reduction of the individual income tax rates would cost more than 3 trillion. How does the plan fill (at least partly) such holes? By repealing exemptions and deductions for an amount close to 7.5 trillion.

Exemptions and deductions benefit the poor and the middle class: their repeal help explain such numbers.

Moreover, a particularly important (and delicate) provision is the exemption of foreign earnings of US corporations from US tax. What this implies is that all those giant American companies, from Apple to Google passing through Microsoft, Facebook and alike, wouldn’t have to pay a nickel in taxes when they bring their offshore profits back into the country. As we are aware, more than two trillions of them are stashed offshore. With the standard 35% tax rate, that would amount to more than 700 billion dollars. Such an amount could be used, for example, to pay off the deficit and more or invest in rebuilding the crumbling infrastructure of the country. Instead, the plan suggests to tax past profits una tantum at a 10% rate and all future profits at 0%. It sure looks like a great way to perpetuate the discontent with “the swamp”.

Fundamentally, we witness a shift in the tax burden from business to people, and to the poor and middle class in particular. While it’s known how that the share of income accruing to the top 1% doubled, between 1980 and 2013, it’s less known the insight that is found into a 2015 paper by, among others, Danny Yagan and Owen Zidar called “Business in the United States: Who Owns It and How Much Tax They Pay”: they find that more than 50% of that doubling is due to an increase in pass-through business income. Cutting the tax rate on a primary source of the increase in inequality in the last five decades is a great way in order to generate negative effects on a social fabric already in tatters.

This is a spectacularly regressive plan. In a time when the United States has inequality levels as high as they have been in over a century, such a proposal, if enacted, will only exacerbate the issue.

It’s interesting to see what American citizens think about such proposal. The trusty Pew Research Center published, on the same day, the results of a survey that asked the interviewees what they thought about increasing tax rates on corporations and annual incomes above 250.000$: 52% support increasing taxes on corporations and large business while only 24% support decreasing them and 43% support increasing taxes on annual incomes above 250.000$ while only 24% support decreasing them. The Republicans, and President Trump first and foremost, will have a tough time selling a plan which three-quarters of Americans don’t support.

Given the economic madness herein contained, how are they going to go about this? The answer is what George H. W. Bush, not so long ago, famously called “voodoo economics”, which has passed into the annals of history also as “trickle-down economics”. In a nutshell, the theory goes like this: reduce the taxes at the top, the richest members of society will invest, people will be employed, everybody’s earnings will skyrocket. Also, the tax cuts will pay for themselves via increased economic growth, increased incomes and alike. It promises Valhalla, essentially. What is truly unfortunate is that such an “economic theory” is not even an “economic theory”, as it’s empirically founded as the Laffer’s Curve, which has no consistent empirical merit whatsoever. The name “voodoo economics” is hence perfectly appropriate: these tax cuts do not pay for themselves and if anything trickles, it trickles up. It’s not economics, it’s first-class political marketing and propaganda. And this is not economists’ (aspiring or Nobel-prize winners) conclusion. David Stockman, Director of the Office of Management and Budget (the “Treasury” inside the White House) under President Reagan from 1981 to 1985, the man who was in charge of translating the politics into numbers, said so in a series of infamous recordings with the Washington Post in 1981. «I’ve never believed that just cutting taxes alone will cause output and employment to expand» he said. Supply-side economics was a “Trojan Horse to bring down the top rate”. So there you go, guilty as charged. Stockman candidly admitted that the bill was nonsensical and without any sound, theoretical undergirding: «None of us understands what’s really going on with all these numbers». And understand what was going they did not indeed: the tax maneuvering contained in the 1981 bill “Economic Recovery Tax Act” was wreaking such a havoc on the deficit and on economic performance that the year later the Tax Equity and Fiscal Responsibility Act of 1982, defined by the New York Times as “the largest revenue raising bill ever”, had to be swiftly passed to contain the damages. For further confirmation of the damages inflicted by the application of “supply-side economics”, just ask Kansas Republican Governor Sam Brownback how the “real-live experiment” he made ended up to be. He will tell you that employment has increased at one third of the national rate, economic growth at less than half, personal income tax receipts decreased by 24% and the absymal growth boosted collection by only 2%, tax revenues were significantly lower (not higher, as “voodoo economics” would want you to believe) which had rating agencies downgrade Kansas’ bond ratings twice (which implies future higher interest rate on borrowing, making anything from infrastructure to schools building more expensive). The proposed tax reform of 2017 is, essentially, founded in the spirit of the “Economic Recovery Tax Act” of 1981, the Bush tax cuts of 2001 and 2003. Bad omen.

A reasonable question would be, at this point: how come that if trickle-down economics has been so severely, empirically discredited throughout recent history it’s still around? A tentative answer has little do with economics and more with psychology and anthropology: that people believe what they want to believe. If you want to believe that tax cuts will pay for themselves and that economic prosperity will spur out of them, you will, no matter how many data, spreadsheet, charts and years of history one can throw at you. And on this, the President and Congress will exert leverage.

Bottom line: the proposed “tax reform” is “this bad” economics and politics. A more realistic and sincere heading would be something along the following lines “billionaire, here’s a million more to arrive at the end of the month”. It would be delightful to see how far this would go in such case.