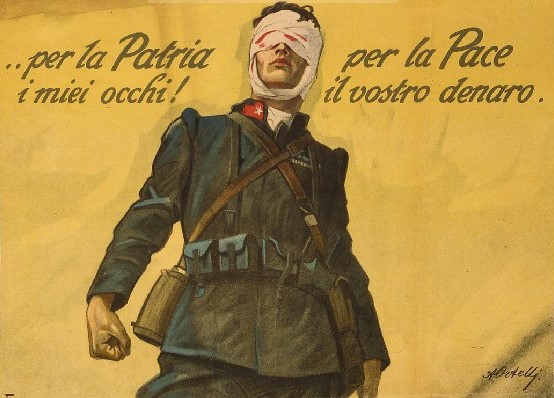 It’s no publicity stunt, no over-democracy, no modern-day weakening – war is horrendous. Humankind tends to forget such horrible events in order to find the strength to sprout again, burying the instincts that brought it there along with their dead. No need to point out the risks in such process. It’s true, in spite of the constant human perception of being on the rim of annihilation, eras tend to balance themselves, and much more than mere words alter that balance towards a direct conflict’s resolution. This said, many agree on the contemporary age humans facing a considerable menace, caught between the loss of the Nation’s direct power – intended as control and regulation – and the eventual loss of direct contact with reality and therefore history. War is a hot topic on this front. Let’s make an example: less than two years ago the American Video Game company EA released Battlefield 1, an FPS (First Person Shooter) set in WWI. As the already popular franchise took some distance from the COD format, it got closer to the reality of an actual combat, making the users deal with death, mutilation and loss. As high-quality as intrinsically horrible. War-horrible. Critics awed, while young and careless gamers were disappointed, for one basic reason: it wasn’t funny anymore. Awareness came as a hammer. Apart from these reactions – or maybe because of them – the result is a success, and a winner rises above the contingency: history.

One hundred years from the end of WWI, we ought to remember what it means to put a nation through war: beyond interest, balance and geopolitical relations. It means death, ruin, and debt.

And not only for those who leave. It means to see a beloved city go destroyed, its inhabitants die like rats and never feel safe. Let’s take a look at Milan, home to our University: a haven for many, a place in which to grow for all. One hundred years ago Milan was on the brink of desolation (and unconsciously destined to live it all again in less than 50 years). The only thing that kept it going was – not dissimilarly from the many other crisis it went through – its spirit. The willpower to renovate, and the strength to aggregate. A man-made miracle. If you wish to witness such process, and the step that made a pacifist city – as its then-mayor Emilio Caldara intended – into a pillar of material and spiritual support for a Nation at war, go see the exhibit Palazzo Morando is now hosting, “Milano e la Prima Guerra Mondiale” (Milan and WWI). A treat for the history enthusiast, an ever-needed memento for every citizen.

Photos, postcards and maps, they all form one big manifesto, with one big message: Milan was great, but war sucks.

And it’s no fake news.