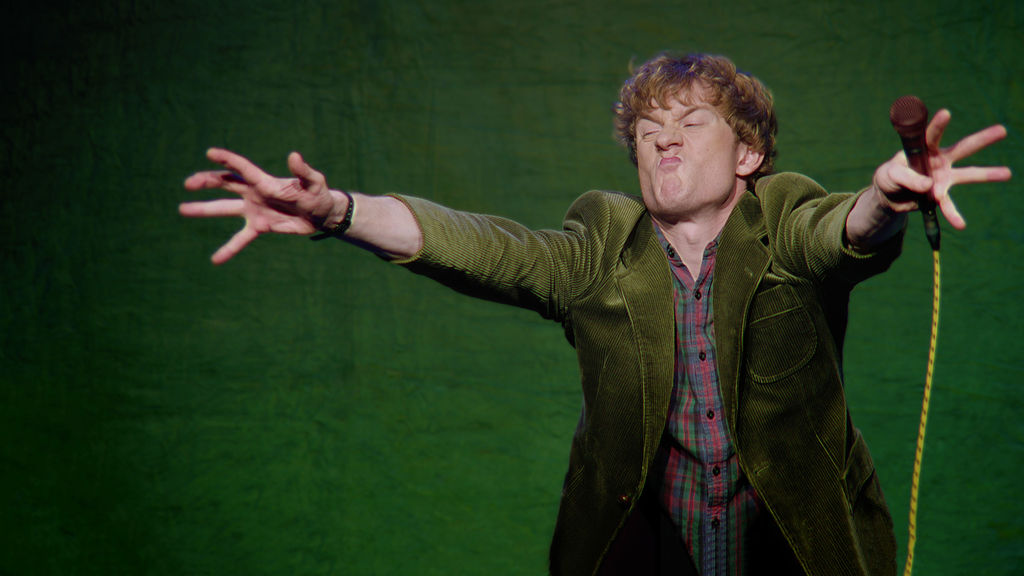 Four episodes, two acts, one show. British comedian James Acaster just landed on Netflix with his marvellous Repertoire, both looking like an idiotic child and a genius thinker. With nothing more than a microphone and a stool, he monologues for more than three hours, distributing the efforts like a marathon runner.

Lone ginger on a stage, Acaster divides the stand-up into four episodes, each based on an – apparently – self-sufficient story, revolving around different versions of his life. He unravels what could have been, always on the verge of confusing reality and fiction. He presents himself as a too-enthusiast undercover cop, then the proud member of a jury, a honey seller in a scam two-people company, and a lollipop man. As he creates complicity with the public, Acaster scatters small hints of his real life along the way, putting the spectators in the awkward position of wondering how much of the truth they’ve hysterically chuckled at.

Emphasizing on puns and expressions, gestures and sound, Acaster’s jokes only seem to seek light-hearted laughs, while he actually dives deeper and deeper into many hot topics: Christian morality, gender discrimination, the value of life. As he builds a humongous castle of imagery, he inevitably reveals more and more, exposing himself to public scorn, frail and stoic at once. Still, he dives with such lightness the audience does not realise until too late. The viewers then consciously follow him down the lane, shutting the laughs as soon as they sense the tone shift. Still, it’s never depressing.

Putting himself among the best of British stand-up comedians, Acaster finds himself at ease in the ironic self-deprecation that derives from the realization that nothing matters, and we’re all stressing after small matters.

As the perfectly balanced show goes on, parts of the previous jokes are preserved to be used later on – exactly as the many characters would do in a classical novel. The result is a huge number of smirk-inducing tricks, aligned to create one big, fun story.

Shaped to the essential, the performance never tires its audience. James Acaster keeps astounding it.