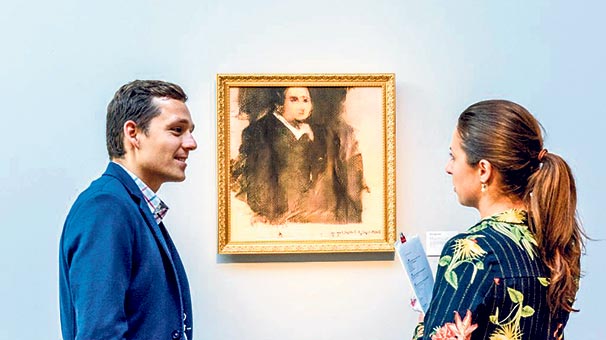 The world was once worried AI would destroy civilization. What if it could join it?

Many have interpreted the landing and selling of the first AI artwork at Christie’s as a primal step towards the contamination of human art. While some despise the impossible efforts made by AIs to keep up with a proper conscience, others are pointing out how such piece, as well as the others that forerun it, is not an AI independent production, and therefore not an AI piece of art. The Portrait of Edmond Belamy was in fact created by the French three-students-collective Obvious, which trained a machine learning algorithm known as GAN, or generative adversarial network, on a series of historical portraits to try and obtain an authentic production.

With the same process they obtained throughout the last year several portraits of the members of the affected Belamy family – a witty translation of the name of GAN’s first creator Ian Goodfellow – but didn’t meet a global public response until catching the attention of the British auction house. Despite being estimated for no more than $10,000, the Portrait of Edmond Belamy was sold to an anonymous buyer for $432,500, sparking a debate on a double front, regarding the paternity of the code and the aptness of the “art” etiquette.

As a matter of fact Pierre Fautrel, Gauthier Vernier and Caselles-Dupré, the men behind Obvious, didn’t invent the Belamy code but modified pre-existing strips to best suit their taste and apparently the market’s as well. The original code was designed by teenager AI artist and coder Robbie Barrat, who, apart from making it available via an open-source license, experimented with it and was already able to accomplish strikingly similar results to the first French productions. Being very renowned in the specialist environment and working in a research lab at Stanford, the American artist is not worried about not sharing the spotlight (part of the code also being put as the canvas’ sign) but has expressed some concerns regarding the collective presenting the art as traditional. This could make it harder for artists using AI as a tool to be told apart from coders. This piece of art is not autonomous.

Deriving from misleading premises, the disquisition on the grade of artistry to be found in the Edmond Belamy is not yet fitting.

If, or more plausibly when, such program will be in charge of writing its own code – a novel faber eius fortunae – the world will have to ask itself how to consider its production. Will art historians treasure the transition from modern to contemporary art, or will the humanity of the author be the new unbreakable frontier? Is there such a thing as an unbreakable frontier in art, and should there be? Whereas not being just the right time to protest, this might be the occasion to debate and reflect on such matter, wondering if the message of a work might only lie in the eyes of its gazer.